February 03, 2015 by Hayley Fargher No Comments 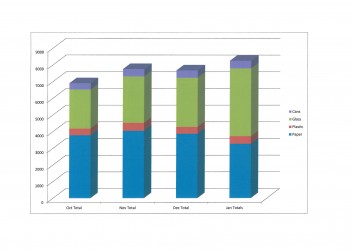 £722.00. This was dwarfed however by the fact that the reduced load on our refuse truck meant that from early January we have been able to reduce household collections to a single day each week- scrapping the Friday collections. As putting a bin lorry and crew on the road for a day costs more than £500 this has saved more than £2000 in the same month- money we can put to better use.

A big thank you from all at the Town Hall for all the effort put into recycling. Please keep it up.